Sure, throwing for four touchdowns and 348 yards and securing MVP honors in Oklahoma’s 45-31 Sugar Bowl win over Alabama was memorable.

Sure, beating rival Texas in 2014 in the Red River Rivalry was memorable.

Sure, when the 6-foot-1 play-caller transferred to Texas A&M and proceeded to lead the Aggies to a 6-0 start and a top-five national ranking, that was memorable.

These feats contributed to his 2016 Wuerffel Trophy honor, which was announced internally by Danny Wuerffel and Wuerffel Trophy Executive Director Tom Brassell on a conference call Monday and then later to the public Tuesday at the National Football Foundation’s Annual Awards ceremonies press conference at the Waldorf Astoria in New York City. 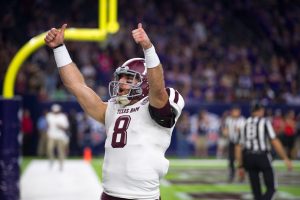 Yet bigger than his right arm is the heart that resides within that powerful frame.

That’s what guided him to weekly visits to OU’s Children Hospital. That’s why he’s become a staple speaker at local schools and churches. That’s why, as college football has grappled with racism on campuses nationwide, Knight was one of seven members of the Football Leadership Council that decided to make a stand and make a statement to bring awareness of the discrimination.

That’s what’s fueled him to organize four straight mission trips to Haiti, the first three with OU and the latest with the Aggies.

And that, more than the 3.2 GPA he graduated with at OU and his on-field accomplishments, fueled his selection as the winner of the Wuerffel Trophy, labeled “college football’s premier award for community service.”

Knight, who will lead the Aggies into a Texas Bowl showdown against Houston on Dec. 28, was chosen over finalists Christian McCaffrey, Stanford’s running back, and University of New Mexico offensive lineman Garrett Adcock.

“We’re very honored to have Trevor join this crew of outstanding young men,” said Wuerffel, a Fort Walton Beach High alumnus who led the Vikings to a state title in 1991 and then the University of Florida to a national title in 1996 during a Heisman Trophy campaign. “Without question he was deserving of the award and we’re just really humbled and proud to have him join the family.”

That family includes Ty Darlington, last year’s winner, and a four-year roommate of Knight at OU.

“We’ve talked about that a little bit,” Knight said. “He was ecstatic I was a finalist.”

When Wuerffel informed Knight he’d won, the quarterback was humbled. And he was beaming.

“There’s a big smile on my face right now,” he said on the press conference call.

Growing up, college quarterbacks such as Colt McCoy, Sam Bradford and Stephen McGee were Knight’s idols for their accomplishments on and off the field. Now his path will do the same for others.

“I continually remind myself I have a platform to help people,” Knight said. “I’m in this position where I can’t lose sight of kids looking up to me.”

To Texas A&M coach Kevin Sumlin, there’s no better role model out there. 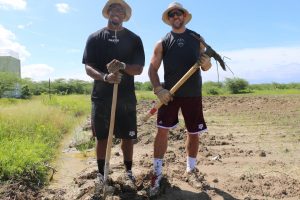 “In just 11 months his impact on the football team, the community, in leading the the trip to Haiti, his impact is not just football related. … He’s brought together the whole athletic department.

And that’s why, when Sumlin spoke at Tuesday’s press conference on behalf of Knight, he said of his play caller: “As good as a football player he is, he’s a better person.”

Knight will accept the award at the 48th annual All Sports Association Banquet on Feb. 10 at the Emerald Coast Convention Center.