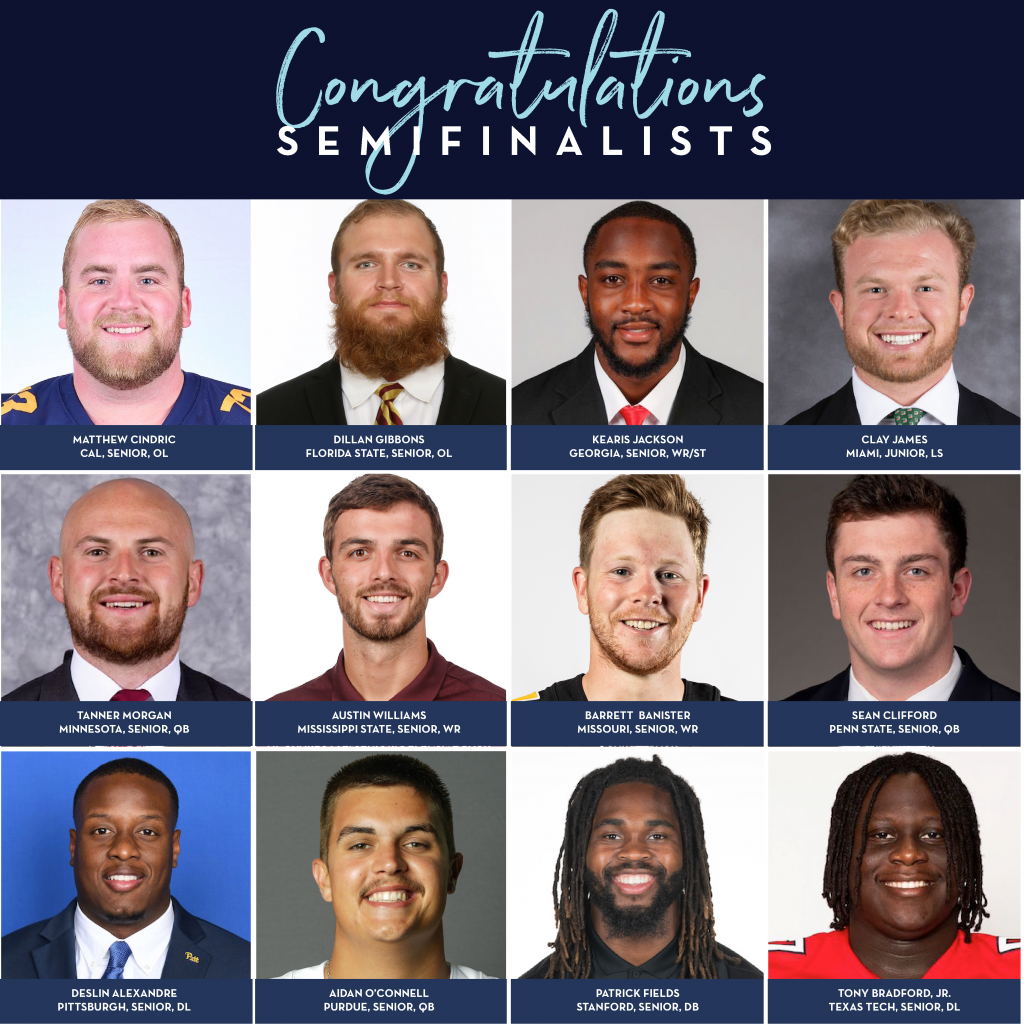 The Wuerffel Trophy, known as “College Football’s Premier Award for Community Service,” is presented each February in Fort Walton Beach, Fla. Named after Danny Wuerffel, 1996 Heisman Trophy-winning quarterback from the University of Florida, the Wuerffel Trophy exists to honor college football players who serve others, celebrate their positive impact on society, and inspire greater service in the world.

“These twelve young men separated themselves from a remarkable group of nominees because of their service to others and their wide-ranging impact on those around them,” said Wuerffel. “They are leaders not only on their teams, but in their university communities and hometowns as well. Congratulations to the 2022 Wuerffel Trophy semifinalists.”

The 2022 Wuerffel Trophy semifinalists are listed alphabetically by university:

Nominations for the Wuerffel Trophy are made by the respective universities’ sports information departments and closed on October 14. Finalists for the award will be announced on November 29.

The formal announcement of the 2022 recipient is scheduled to be made December 8 and the presentation of the 2022 Wuerffel Trophy will occur on February 24, 2023, at the 54th All Sports Association Awards Banquet in Fort Walton Beach.

ABOUT THE WUERFFEL TROPHY
Established in 2005, the Wuerffel Trophy honors college football players who serve others, celebrate their impact, and inspire greater service in the world.  A member of the National College Football Awards Association, the Wuerffel Trophy is presented annually to the FBS player who best combines exemplary community service with leadership achievement on and off the field.  It is the first major award honoring the character of service to others.

The Wuerffel Trophy is named after Heisman Trophy winner, College Football Hall of Famer, former NFL quarterback, and renowned humanitarian Danny Wuerffel, whose life mission is to inspire greater service in the world. Wuerffel led the University of Florida to four SEC Championships and the Gators’ first National Football Championship as the team’s star quarterback. The 1996 Heisman Trophy winner set 17 NCAA and Florida records and won a myriad of other awards including the Maxwell Award, the Davey O’Brien Award, and The William V. Campbell Trophy, presented to the nation’s top scholar-athlete. As a nationally recognized humanitarian, Wuerffel inspires leaders to use their influence to make a positive impact and currently serves as President of the Wuerffel Foundation.