The unlikely journey for the Jets’ latest recruit started as an afterthought.

Like so many young Native men, Teton Saltes loved basketball, but he also knew he needed to stay busy, stay fit. So during his junior year at Valley High School in Albuquerque, he decided to try playing football during the basketball off-season.

“I got bored my junior year waiting for basketball season to come around,” the 23-year-old Oglala Lakota man told Indianz.Com recently. “I decided to kill time for basketball.”

But after he sacked the quarterback three times and blocked several field goals during his first game, he realized his future might lie on a grassy field, rather than a cement court.

“I didn’t know what the heck I was doing,” he said.

But it felt right, and he kept playing, eventually getting offers to play for such football powerhouses as Oklahoma, Oregon, Texas A&M and Duke. He eventually accepted an offer from the University of New Mexico, where he became an all-conference player and won several national awards, including the Allstate and American Football Coaches Association’s Good Works Team for his efforts to help those in need.

And earlier this year, he was given the prestigious Wuerffel Trophy for his community service and his athletic and academic achievements. The honor was announced live on The Home Depot College Football Awards on ESPN.

On May 1, the 6-foot-6, 322-pound offensive lineman signed a contract with the New York Jets as an undrafted free agent.

“Where I’ve gotten today, I didn’t do it alone,” he said. “The only reason I got there was I had such a great support system.”

Saltes spent his earlier years on the Pine Ridge Reservation, riding horses and becoming steeped in the culture and history of his people and his family, a family long known for its athletic prowess. His aunt, SuAnne Big Crow, was a basketball legend for the Pine Ridge Thorpes, helping that team win the 1989 South Dakota state basketball championship game with a last-second winning basket. She died in a car accident in 1992 while driving to an event where she was to receive an award for her athletic achievements. Saltes’ mother Laticia Decory played for Brigham Young University, and his older brother Adonis played for Southern Utah University.

Saltes left the reservation not long after finishing elementary school there, moving first to Phoenix and later Farmington, New Mexico, before landing in Albuquerque. But, he maintained his connection to his people’s homelands, returning every summer. The young Lakota man enjoyed the freedom of the reservation and loved being around his family. Decory said she is still awestruck by the news of her son’s professional football contract.

“It’s just exciting to me because I can remember way back when he was younger,” she said. “I couldn’t imagine what he was going to do with his life.”

She said everyone on the reservation is now a Jets fan. People have been driving by their home honking, and others have stopped by to have her son sign their helmets. One person called to say he had gotten a Jets tattoo.

“That excitement is just amazing,” she said. “I still don’t even think it has hit me.” 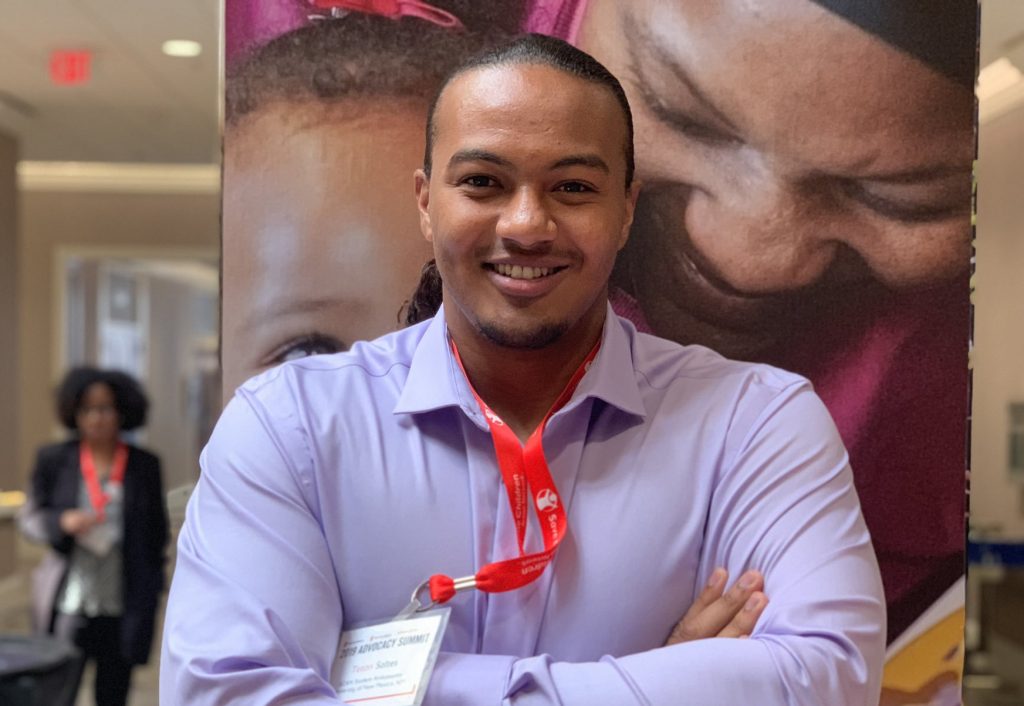 She said she hopes her son’s achievement will inspire other young Lakota boys and girls to fight for their dreams. Decory said the road to the NFL wasn’t an easy one for her son, who at times expressed frustration and fears that he might not reach that level.

But, Saltes isn’t only a football player, and he said he hopes to use his new fame to advocate for causes in which he believes. He hopes to finish his law degree after getting settled into his professional football career, and he hopes to continue speaking out on behalf of Native people and others. He has already testified before Congress and the Senate in support of a bill to expand early child care funding and spoke before the New Mexico Legislature in support of funding for mental health initiatives for student athletes, helping secure nearly $500,000 for that cause.

“It was really cool and definitely something that we really needed,” he said.

Tune in tonight 7 @NMinFocus @NMPBS. We talk to @UNMLoboFB Teton Saltes about his advocacy in tribal communities as a life awareness mentor & Save The Children advocate. #OglalaLakota #SuicidePrevention #NM #Lobos #CommunityService pic.twitter.com/U0xgX43R1t

In the future, he hopes to establish an organization that would teach young Native children to lobby state, federal and tribal leaders and to harness their political power to help their people.

“A lot of people here want to create change on the reservation, but they may not know the best way to do it,” he said. “I would love to establish something that would teach them how to do that stuff.”

But for now, he plans on focusing on his football career, and recently, he left the Pine Ridge Reservation to begin rookie training camp.

“It’s definitely been a journey, a journey that’s just now beginning,” he said.