Congratulations to Gabe Ikard, offensive lineman for the University of Oklahoma Sooners, the 2014 and ninth recipient of The Wuerffel Trophy. The Wuerffel Trophy recognizes the NCAA Football Bowl Subdivision player who best combines exemplary community service with outstanding academic and athletic achievement. 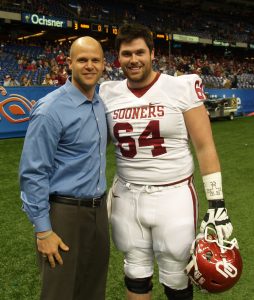 Gabe Ikard was a highly recruited high school player in Oklahoma City where he excelled on sides of the ball. Earning Defensive Player of the Year in high school district play, Gabe was recruited by major programs as one of the country’s leading tight end recruits. After signing with the Sooners, Ikard shifted to the O-line with time at left guard before settling in as the line’s anchor and dominant center.

On the gridiron, his quickness, strength, toughness, and execution clearly distinguished Ikard as one the elite blockers in the game and an inspirational leader on the Sooner team. Ikard was a consistent contributor throughout OU’s successful 11-2 campaign this past season, a season culminating last month with an invitation to the Allstate Sugar Bowl, a 45-31 upset of the Alabama Crimson Tide, and a No. 6 final ranking in both the AP and USA Today Coaches polls. Ikard never allowed a single sack this season and is widely regarded as the best center available in the upcoming NFL draft this April. 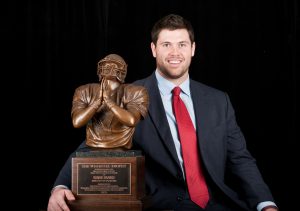 A Wuerffel Trophy finalist last year, Ikard is a graduate student at Oklahoma pursuing a second degree in human relations. He received his bachelor’s degree last May in multidisciplinary studies with a focus in medical sciences—a curriculum specifically selected to best prepare him to pursue a medical degree. He graduated with a perfect 4.0 GPA. His academic excellence earned him Academic All-Big 12 First Team honors all four years. After being named to the Capital One Academic All-America First Team his junior season, Ikard was named the Capital One Academic All-American of the Year his senior year and also earned the 2013 Gerald Lage Award, the highest academic award given by the Big 12 Conference. He is the first Sooner football player to be a three-time CoSIDA Academic All-America honoree.

In December, Gabe was invited to New York City as a 2013 National Football Foundation Scholar-Athlete and one of 16 finalists for the coveted Campbell Trophy, often referred to as the “Academic Heisman.” His end-of season accolades also included being named a finalist for the Rimington Trophy and the Senior CLASS Award. CBS Sports, Walter Camp, and the AFCA each named Gabe as First-Team All-American and he was named winner of the Selmon Spirit Award in Tampa last December.

Gabe knows that with success comes responsibility: “Coach Stoops does a great job of instilling in us the responsibility to not only carry on the tradition of Oklahoma Football on the field, but to also follow in the footsteps of those Sooners who have made a difference of lives of others in the community.” He serves on the OU leadership team for FCA and is a popular speaker. In 2012, he made a life-changing trip to Haiti with several Sooner teammates to rebuild and repair—in oppressive heat—damage caused from the massive January 2010 earthquake. Last May, Gabe volunteered his services following the severe damage left behind by a series of deadly tornadoes across portions of Oklahoma.

Ikard is recognized on campus, in Norman, across Oklahoma, and throughout the country for his unconquerable spirit and unwavering faith. “I feel blessed in so many ways for all of the opportunities that attending the University of Oklahoma has provided for me, and I thank my family and all of those at OU who have supported me along the way.” We are proud to recognize Gabe Ikard as the newest member of the Wuerffel Trophy family and we congratulate him for his extraordinary work on and off of the field.

Gabe is the son of Jim and Becky Ikard of Oklahoma City.