NEW YORK (Dec. 4, 2018) — Danny Wuerffel announced at the National Football Foundation’s Annual Festivities at the New York Hilton Midtown Hotel that Drue Tranquill, linebacker from the University of Notre Dame, is the recipient of the 2018 Wuerffel Trophy.
The Wuerffel Trophy, presented by the Chick-fil-A Foundation, is awarded to the Football Bowl Subdivision football player who best exhibits exemplary community service at the All Sports Association’s annual banquet in Fort Walton Beach, Fla.
“We are honored to announce that Drue is this year’s recipient of the Wuerffel Trophy and are elated about him joining our family of past winners,” said Wuerffel. “What he has done serving others off the field, along with his work in the classroom and on the playing field, represents the true meaning of the award. Also, I’d like to say the same about our other two finalists, Dalton Risner and David Blough. The community service that these young men have done is just incredible. I wish we could hand out 3 Wuerffel Trophies.” 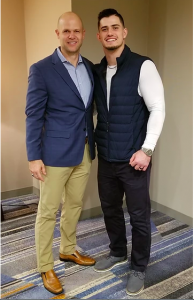 Tranquill, a senior linebacker from Fort Wayne, Indiana, is a 3-time Wuerffel Trophy nominee and graduated in May with a degree in mechanical engineering. He has been named to the Dean’s List in five of his eight semesters and is a National Football Foundation William V. Campbell Trophy finalist this season. A 2-year team captain for the Fighting Irish, Tranquill volunteers his time locally with Lifeworks Ministry, AWP Sports, as an ambassador for Dream Teams, with the Food Bank of Northern Indiana, the Center for the Homeless and South Bend Boys and Girls Clubs, just to name a few. Also, he has served on three mission trips to the Dominican Republic as a team leader with Here for Kids International.
“Drue’s dedication to serving others, especially young people, is a shining example of our Foundation’s mission to help every child become all they can be,” said Rodney Bullard, Executive Director of the Chick-fil-A Foundation and Vice President of Corporate Social Responsibility at Chick-fil-A®. “We’re proud to have a part in recognizing him for his service and we look forward to seeing how he continues to lead and inspire.”
The Wuerffel Trophy, named after Wuerffel, the 1996 Heisman Trophy-winning quarterback from the University of Florida, is awarded to the Football Bowl Subdivision player who best combines exemplary community service with athletic and academic achievement.
On Thursday, Tranquill will be interviewed on The Home Depot College Football Awards Red Carpet Show on ESPNU and ESPN3 at 6 p.m. EST/5 p.m. CST, featuring interviews with award winners and finalists as they approach The Home Depot College Football Awards Show, the College Football Hall of Fame and Chick-fil-A Fan Experience in downtown Atlanta, Georgia.