Barrett Jones always looked like the fresh-faced guy tapping the keg at a fraternity party, but during his time as an Alabama Crimson Tide offensive lineman he was a menace in the trenches, making Southeastern Conference history by earning all-league honors at three positions. 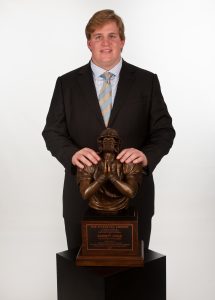 Jones is the perfect starting point in the countdown of the top five players in Alabama history based solely on their college accomplishments. John Hannah, Dwight Stephenson, Chris Samuels and Andre Smith were stellar Tide offensive lineman who had far superior NFL careers compared to Jones, who lasted just two seasons with the St. Louis Rams but took a back seat to nobody during his time in Tuscaloosa.

The former four-star prospect from Evangelical Christian near Memphis was a dominant component on three national championship teams under Nick Saban, who likened the 6-foot-5, 302-pounder’s versatility to that of Pro Football Hall of Famer Bruce Matthews. Saban was a Houston Oilers assistant from 1986-89.

“He’s the only guy that I can remember who did what Barrett is doing now, so that’s pretty high class there to be compared to someone like him,” Saban said in 2012. “Barrett Jones has been an outstanding leader on our team on and off the field, and his academic record is absolutely as good as anybody we’ve ever had around.”

After redshirting in 2008, Jones started all 14 games at right guard and earned Freshman All-America honors for the 2009 Tide, who went undefeated, won the program’s first national championship in 17 seasons and produced the school’s first Heisman Trophy winner — running back Mark Ingram. Jones remained at right guard in 2010, earning All-SEC honors for the first time, before moving to left tackle in 2011.

During the 2011 regular season, Jones played 587 snaps and was graded with only nine missed assignments. He earned All-SEC and All-America honors and cleaned house on the awards circuit, winning the Jacobs Trophy as the SEC’s top blocker and the Outland Trophy as college football’s top lineman.

Alabama’s biggest need after the 2011 season was at center due to the graduation of three-year starter William Vlachos, so Jones moved inside knowing he wouldn’t have the same spotlight as a senior.

“What little glory the offensive line has, the left tackle hogs about 90% of it,” Jones said the summer before his final season.

Jones repeated All-SEC and All-America honors as a senior, and he won the Rimington Award as the nation’s top center. In his Tide finale, Jones anchored a front that paved the way for 153 first-half rushing yards on 23 carries as Alabama built a 28-0 lead in its eventual 42-14 shellacking of Notre Dame in the BCS title game of the 2012 season.

In addition to his football achievements, Jones posted a 4.0 undergraduate GPA and earned a master’s degree in accounting weeks before the Tide’s demolishing of the Fighting Irish. He is the only four-time Academic All-American in Tide football history.