During group sessions at his church outside Charlotte, a subject Tyriq Harris has talked about is his purpose in life.

Anybody who has come in touch with Harris during his collegiate career at UNC Charlotte has likely concluded that not only does he live each and every day with purpose and meaning, but he does so with much vigor. 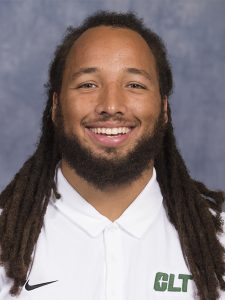 “My purpose in life is to help and be a blessing to others,” said the defensive end and graduate student. “My parents (Cari and Keith) instilled the desire to help others that are in need and to be able to give back what has been given to me. To be a blessing to others and show the love that I have been shown is a feeling that is indescribable.”

Many adjectives could describe Harris’ work in the community, classroom and football field. One could start with “selfless” and “dedicated” in talking about a young man who on several occasions has been named to the chancellor’s and athletic director’s list for his classroom performance, something that has also resulted in Conference-USA honor roll recognition each of the past five years.

Because of his diligence as an officer with the school’s Student Athlete Advisory Committee (SAAC), Harris is a three-time winner of the organization’s “Mr. 49er” award, which recognizes an outstanding level of participation among male student-athletes at Charlotte.

Harris’ volunteer endeavors in Charlotte include working with youths at church and the YMCA as well as events such as the Tim Tebow Foundation’s Night to Shine and blood drives.

Harris’ level of participation in the community and success in the classroom has led to being among nine semifinalists for the Wuerffel Trophy (community service/athletic and academic achievement) and 12 finalists for the Campbell Trophy (top scholar-athlete). Finalists for the former will be announced December 22 and, according to the National Football Foundation, the winner of the latter will likely be announced prior to the January 7 awards show on ESPN.

Memphis quarterback Brady White and Texas quarterback Sam Ehlinger are the only others who have come this far with both awards.

“I am really blessed to have the opportunity to be in this position,” said Harris, who in 2019 was a nominee for the Allstate American Football Coaches Association Good Works Team, a Campbell semifinalist and on the Wuerffel watch list. “It’s kind of awesome to see the recognition for some of the things that I have done. At the end of the day, though, it is not about the awards and stuff like that. It is ultimately about being able to give back to the community and be able to do the tasks that my parents asked me to do. It is a blessing to make them proud with what I am able to do everyday and it is a byproduct of what God has blessed me with.”

As last season’s opener against Gardner-Webb was fast approaching, intense pain made it difficult for Harris to get into his car one morning. After a few days, a scan was performed and the diagnosis was a herniated disc pressing against a nerve in his back. Surgery wiped out his season before it started. 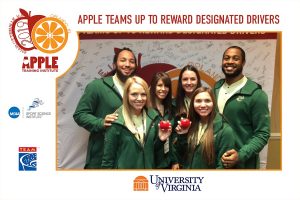 “I never took the game for granted and I always appreciated every opportunity, but (missing last season) gave me a whole new level of respect for people that battled back from injury and had the bounce-back season that they wanted,” said Harris, a diehard Eagles fan thanks to Keith’s Philly roots.

Harris, who started the last 38 games of his career dating to 2017, does not know if he will return next season. The 49ers were scheduled to play at Marshall on Friday night, but that game was canceled and the season is over. Harris received an injury waiver from the NCAA to play this season, his sixth at Charlotte and fourth as an active player, and has the option of playing for the 49ers next year because the governing body ruled that this season will not count against a player’s eligibility.

“It is weighing heavily on my mind,” said the Virginia native on whether he will return in 2021. “The life lessons that football has given me, whether I continue playing or not, will forever be a part of me. It is hard to take away something I have been doing since I was eight years old.”

About the time Harris started playing football he experienced something that left a remarkable impression. He struggled to read as a youth, but thanks to the help of a volunteer he overcame that obstacle. The level of care and dedication shown by the gentleman that helped with his ability to read is something that shaped Harris’ life.

“I think about that often and how somebody took the time out of his day to come read to me once a week on his lunch break so I could have an opportunity to better myself,” he said. “Seeing how he did things and how much love he showed me forever influenced my life. When I (get to an advanced age), I still plan to be doing community service and giving back. This world can be so cold sometimes and to be able to be a light in this world and show God’s love to others is my ultimate goal.”

It comes as no surprise to Chris Everett that Harris would have such a goal. As Charlotte’s director of student-athlete development, Everett has built a nice relationship with Harris. 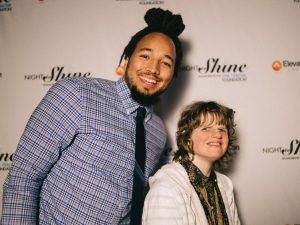 “Tyriq is not only selfless and personable, but he has a lot of energy and people, especially children, connect with that,” said Everett, who overcame his own football injury, one that wiped out what would have been his true freshman season at Western Carolina in 2007. “When you have somebody with such powerful energy, it helps for people to connect with him, be around him and buy into what he is doing. The way he talks and communicates with people and makes them feel heard and loved is truly an art.”

Harris, who dominates his teammates, coach Will Healy and whoever else is brave enough to challenge him at ping pong in the 49ers’ football center, would have it no other way. Communicating with, learning about and helping others is who he is.