Talk about your experience as a student. What is your major/minor? Did you participate in any other activities or campus organizations other than football?
I majored in Political Science with a minor in Native American Studies. I’m currently going through Law School. I’m also a big advocate for mental health and volunteer as a suicide hotline mentor. I grew up in the Oglala Lakota tribe on the Pine Ridge Indian Reservation in South Dakota and go back there to help in youth outreaches teaching literacy to children as well as adults. With the Save the Children Advocacy Network, I spoke to Congress in Washington, DC as a student ambassador. I also served as a keynote speaker to members of the New Mexico Legislature regarding mental health initiatives for student-athletes in the state of New Mexico.

What do your teammates say is your best quality?
They would highlight my leadership. I’m not perfect by any means, but my teammates know that no matter what the circumstance that they can depend on me. I have the ability to lead and motivate the team on and off the field. I am a 2-time team captain.

What kind of role do you see yourself in on the team? What scheme and/or position suits your skillset?
I was a defensive lineman when I first came to New Mexico and was asked to switch positions my sophomore year. So, I can learn and adapt to different roles and ideas. I played on the right side my whole career at RT. I could see myself being moved inside to play RG. I’ve also been in many different schemes from the triple option to a spread system. I like moving in schemes where I’m the pulling blocker. I love being out in space opening up and showing my athleticism. Being a former DL, I’ve always kept that aggressive mindset. Not only does it help me be the mauler, but also allows me to be the aggressor and do it with technique.

Who is the best player you have ever played against in college?
The most athletic guy that I ever faced was Julian Okwara of Notre Dame. He got drafted in the 3rd round by the Lions in 2020. The guy that I saw regularly in our conference that always fascinated me was edge rusher, Curtis Weaver, from Boise State (currently with the Browns). He didn’t wow you a lot with his overall athleticism, but he was a slippery player who always found ways to make plays.

Which one of your teammates impresses you the most?
The guy that impresses me the most is Kyle Stapley, our center. He is a true team leader. He’s a physical hard worker who has a great knowledge of the game. I admire him for the player he is on the field as well as the man he is off the field. He is a man of character with good morals and values. Kyle is coming back for the 2021 season. So, definitely keep your eye on him.

Describe a time in your life when you were able to overcome a struggle.
Making it off the reservation was a big hurdle I had to overcome because the odds were stacked against me. Yet, the hardest struggle that I had to overcome was when a teammate and close friend of mine, Nahje Flowers, took his own life. What made it difficult was that I had Certified QPR Training as a mental health first responder; yet, I didn’t see it coming in time. I struggled with a lot of guilt. We were supposed to have a game that week of Nahje’s death, but it had been postponed until the following week. It was hard going through this crisis because a lot of players didn’t have the heart to play. Yet, despite our circumstances, I still went to work every day. I had to be that “immovable rock” and keep the team together. That’s when my leadership came into play. Good leaders are forced into situations where that ability comes out. The day before our game, I flew out to Los Angeles to attend the funeral to bury him. I arrived at 2 am that morning only to end up playing later that day. We had a moment of silence before we began our game against Boise State. I was able to compartmentalize my emotions and put forth great effort on the field.  I realize that I can’t control everything in life. I had to overcome my situation in order to do my job. That’s what being an accountable and dependable person looks like. I had to stay strong and be there for other people who were going through similar emotions.

If you didn’t play football, what other sport would you play?
Probably basketball. I participated in track & field and basketball in high school. I’m part of a family with great athletes. My brother, mother, and father all played D1 basketball. My father even played professionally in Europe.

What is something that you are most proud of? What would you say is your biggest achievement?
Despite how demanding it can be on the football field, I’m glad it’s not the only thing that identifies me. I’m a multifaceted well-rounded person with high aspirations to help those around me who really can’t help themselves. I’m honored that I was able to accept the 2020 Wuerffel Trophy. Although, I’m very happy that I have been able to make a difference in people’s lives and that I have the opportunity to use football as a platform for bigger things.

Describe one of the most memorable plays of your collegiate career.
In 2017, I went through fall camp as a DL, and a week before the first game there were about 3-4 OTs that quit. So, the team came to me to help fill in. I thought it was supposed to be temporary. I played in the first 6 games getting major playing time 4 of them until I blew my knee out against Fresno State.

In 2018, coming back from my injury, I was able to start my first full year on the OL. In our second game, we were playing against Wisconsin who was highly ranked at the time. I had a huge DL that I was up against in that game. I was playing at about 280-285 lbs. at the time and put forth a ton of effort in that game. I remember a play that was a simple inside zone play. I got under his pads and blocked him downfield getting my first pancake. 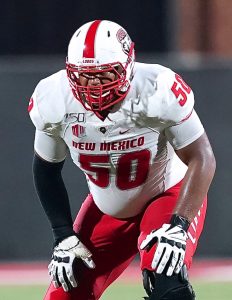 Do you have a favorite athlete or professional team? Is there a player that you model your game after?
I was a huge basketball fan growing up. Ben Wallace was my favorite player. I’ve also learned to appreciate athletes like Muhammed Ali who not only was a phenomenal athlete but broke down barriers in the community. As far as football players, I study guys like Tyron Smith and Joe Thomas. Tyron Smith can be very dominant using his long arms and great technique. Joe Thomas had a great stance and is one of those players that developed a mastery at the position.

Who is your favorite music artist? What gets you pumped before a game?
I love music and listen to a lot of different kinds. Although, I don’t listen to hype music before games. If anything, I’m listening to something that calms me down. My favorite artists right now include guys like KRS-One, Foo Fighters and Kendrick Lamar.

What is your favorite comfort food?
Mom’s baked mac & cheese.

Do you have a favorite movie, TV show or actor?
My favorite TV shows are Supernatural and Lucifer. My favorite movies would be the Lord of the Rings movies. Will Ferrell is one of my favorite actors.

What do you do in your spare time? Do you have any hobbies? Any secret talents?
Like I said, I love music. I play many instruments such as the guitar, piano, saxophone, and the Native American Flute. I can sing as well. I also love to read. In my spare time, I like to watch YouTube videos.

Why do you play football? Who or what motivates you the most?
I love the challenge of being greater than you believe you can be and putting forth the work. The NFL is certainly one of my dreams, but it would also give me a platform to reach more people and inspire change.

My family motivates me the most in who they are as people and what they stand for. I give the best version of myself and play football for the people that need a voice such as minorities in hopes of making a change.