Skip to content
By: Camille Smith Platt – BirminghamChristian.com
The United States makes up four percent of the world’s population yet experiences 27 percent of the world’s drug overdose deaths. This is a jarring statistic for sports journalist Lauren Sisler. It’s also a personal one. In 2003, while a freshman at Rutgers University, she lost both parents to prescription drug overdoses within hours of each other. Best known for her work as an “SEC Nation” pregame reporter alongside Tim Tebow and Paul Finebaum, she reflects on how her Christian faith bolstered her journey through grief, gave her the courage to trust in God’s timing, and has led her to serve as an addiction prevention advocate in Central Alabama.
Originally from Virginia, Sisler describes her upbringing as sports-centered, happy and rich in family relationships. Saturdays were for college football, Sundays for church then the NFL or NASCAR. She and her older brother, Allen, were lovingly competitive. They’d challenge each other to foot races, to see who could throw a ball the furthest. By high school, Sisler was a competitive gymnast training 20-25 hours a week. Many weekends were spent driving to out-of-town meets. Even with a hectic weekend gymnastics schedule, faith in Christ remained center stage. Her coaches were Christians, and she collected inspirational quotes and Scripture passages passed from them and her mother. Her favorite was the poem “Footprints in the Sand.” And prayer time was important. Before bed, Sisler would yell down the stairs for her father to join her for evening prayers. “Those memories are very vivid and strong,” she says.
In March 2003, however, her faith was tested. While a freshman at Rutgers University in New Jersey, Sisler woke up to a distressing late-night phone call from her father. Her mother had died, and she needed to get on the next flight home. Hours later, she arrived in Roanoke expecting her father to pick her up at the airport. Instead, her uncle and cousin were waiting at the curb. Just hours after her mother died, her father had died as well—both to accidental prescription drug overdoses. Lesley Sisler, 45, had struggled with a degenerative disk disease that required multiple surgeries. George “Butch” Sisler, 52, had PTSD from his service in the Navy and had chronic back pain. Their daughter had no clue their dependence on Fentanyl, which according to the DEA is 100 times more potent than morphine, had spiraled out of control.
“When I received that news at first it was very unbelievable. I thought I was having an out of body experience. I’m dreaming,” she explains. “In my mind, the word addiction and drug overdose could not be used in the same sentence as my parents. And I struggled with that emotion and that guilt and that shame for so many years. It took me seven years to acknowledge how my parents actually died,” remembers Sisler. “In the back of my mind, I knew bits and pieces of the story, and my Aunt Linda did her best to try to educate me, but I put up walls of denial and made it hard for her to get through to me. The one thing she finally told me was ‘Lauren, you can’t allow the way they died to define how they lived.’ As I went through that grieving process, I realized OK, wait a sec… you’re right… this is something that happened, I can’t change it, but maybe I can do something with it.” 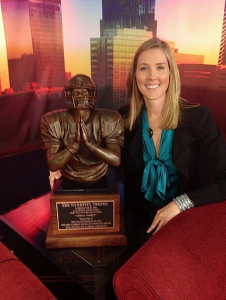 By the time Sisler came to terms with her family’s past, she had graduated from Rutgers University (2006) and was working as a weekend sports anchor in West Virginia. She moved to Birmingham in September 2011 and spent nearly five years at WIAT 42, where she was nominated Best Sports Anchor by the Alabama Associated Press in 2014 and 2015. In 2016, she became a sports reporter and host for AL.com and was offered a job as a sideline reporter for ESPN, covering college football and gymnastics. Keeping her role at AL.com during the week, she moved to the SEC Network on weekends in September 2017. The transition has inspired her to reflect on what it means to be content. “You hear Nick Saban talk about being where your feet are. For a long time, when I was at the local TV station, I started getting complacent and getting anxious for what’s next,” she says. “Now that I’ve reached this level of getting to work with some of the best in the business, I’ve started to realize ‘be where your feet are,’ don’t always focus on the destination. I think this is where God intended me to be. Everything that I’ve been through up unto this point has taught me patience, has taught me to better appreciate where I’m at and the people that are around me.”
Sisler has become a speaker and advocate on addiction. She has worked as a mentor at The Foundry Ministries and is on the Board of Directors and Advisory Board at Addiction Prevention Coalition (APC), based in Birmingham. “Unfortunately, this is a disease, and this is an epidemic that a lot of people turn their heads to—not my problem, not my child, our school system doesn’t have this problem—so there’s a level of denial. Prevention is such a big part of APC’s philosophy… trying to get in front of it before it begins.” Reflecting on her own experience, Sisler wonders if being able to see and acknowledge her parents’ problem would have made a difference. “Hindsight is always 20/20. I wanted to believe that my parents were the strongest people on this planet. They were strong, they were loving, they gave me and my brother everything we needed to succeed, and that was what I believed in my mind. I tried to hide from the fact that they were struggling internally and behind closed doors were having to resort to medication and to alcohol and to other things to try and cope with the pain they were feeling—both chronic pain as well as addiction pain, and then also emotional pain and depression and financial struggles…. I truly wanted to believe that I was invincible and my family was invincible and nothing could tear us apart.” 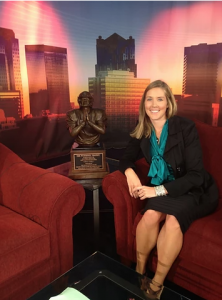 For years, Sisler was critical of herself for her own denial, for taking so long to admit her family’s story and make a difference in addiction prevention and recovery. Today, however, she acknowledges her journey has been in God’s hands all along. “I truly believe that God paved this path and gave me the tools that I needed to deal with the grief myself, to take me through my own process before He was ready to open me up to the concept of sharing their story so openly with other people,” she says. “…. Now it’s very apparent to me that it’s not on our timeline, it’s on His timeline. While we sometimes want to suit up and get back on the horse and ride into the night as soon as tragedy strikes, that’s not how things work. The lessons that have been taught to me throughout this entire process have certainly been a product of faith, perseverance, and really a testament to being the person that I was brought onto this earth to be by our good Lord above.”
As she prepares for football season, Sisler acknowledges that just as she has found her own story to tell, it’s finding the story in others that makes being a journalist so fulfilling.“I just enjoy getting to know people more than just their sport and their game. What drives them? What motivates them? What gets them out of bed every morning and ultimately how did they overcome tragedy? What have they faced in their lives that has made them who they are? What has helped them to identify with themselves and identify with others?” Sisler says. “Nick Saban said it best: when you wake up in the morning, do you pray to be blessed or do you pray to bless others? ….
“I’ve rested on that quote and thought that was a great way to encapsulate my thinking,” Sisler concludes. “If I have an opportunity—whether it’s one person or a million people—to make an impact through my story and telling my parents story, then it’s worth it.”