The Wuerffel Trophy, known as “College Football’s Premier Award for Community Service,” is presented each February in Fort Walton Beach.  Named after 1996 Heisman Trophy-winning quarterback from the University of Florida, Danny Wuerffel, the Wuerffel Trophy exists to honor college football players who serve others, celebrate their positive impact on society, and inspire greater service in the world.

I am so honored to be a part of the Wuerffel Trophy’s selection committee,” said Rutledge, who was fresh off of her job as emcee of the Wuerffel Foundation’s Desire Cup Dinner Gala.  “I cannot wait to learn more about these amazing young men who are doing incredible things serving others. I am truly honored and thankful for the opportunity to join in.” 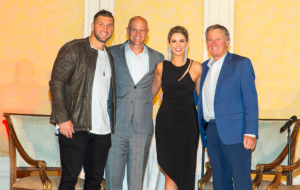 “When you hear the name Laura Rutledge, you not only think of college football and athletics, but also of character and class, and a giving person who serves others,” said Wuerffel. “To say that we are excited to have her join us would be a huge understatement.  We are so proud to announce that she is a part of our national selection team.”

Rutledge is the host of ESPN’s year-round weekday NFL news and information show NFL Live and SEC Network’s SEC Nation.  She was named the host of NFL Live in June 2020, and also 2020, was her fourth year as host of SEC Nation and fifth year with the show overall.

Rutledge has a broadcasting journalism degree from the University of Florida, where she also won the 2011 Red Barber Award for Excellence in Broadcasting at UF.  Rutledge is an Ambassador for the Miracle League an organization that builds baseball fields for children with disabilities.

The Wuerffel Trophy is a member of the National College Football Awards Association (NCFAA), which encompasses the most prestigious awards in college football.  Founded in 1997, the NCFAA and its 25 awards now boast more than 800 recipients, dating back to 1935.  Visit www.ncfaa.org to learn more about the association.