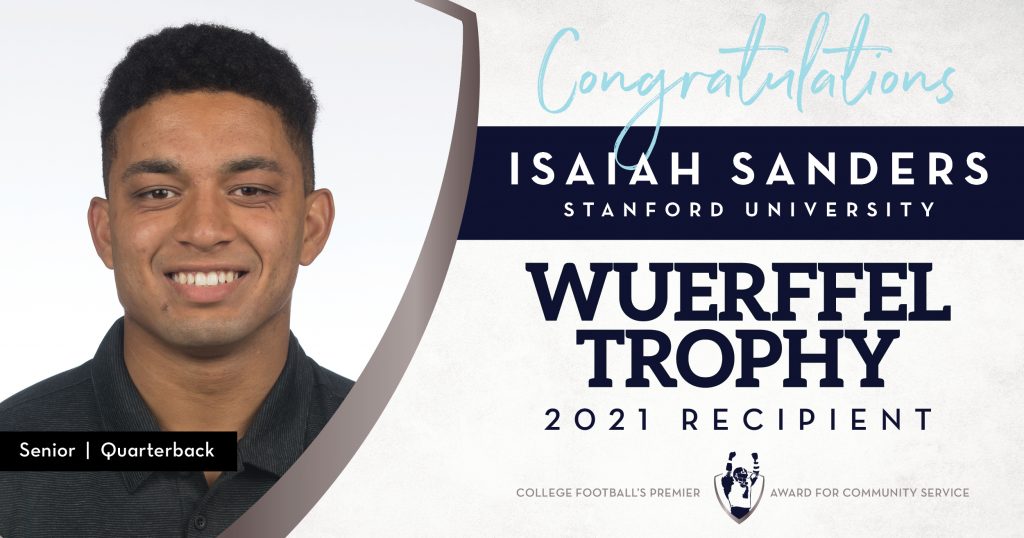 BRISTOL, CT – (December 9, 2021)  – Senior quarterback Isaiah Sanders of Stanford University was announced as the 2021 recipient of the Wuerffel Trophy this evening on The Home Depot College Football Awards on ESPN.  It was a night of several “second times” for the award, as Sanders becomes the Wuerffel Trophy’s second recipient from the Pac-12 Conference, and also, tonight was the second time the award was unveiled on the prestigious awards show itself.

The Wuerffel Trophy is awarded to the Football Bowl Subdivision football player who best exhibits exemplary community service, and was created in 2005 to inspire greater service in the world.  The award exists to honor college football players who excel in Community Service and celebrate their positive impact on society.

Sanders was commissioned as a 2nd Lieutenant in the United States Air Force in April 2020 and was selected as a Human Factors Engineer by the USAF.

The formal presentation of the 2021 Wuerffel Trophy to Sanders will occur on February 25, 2022 at the 53rd All Sports Association Awards Banquet in Fort Walton Beach.

The Wuerffel Trophy is named after Heisman Trophy winner, College Football Hall of Famer, former NFL quarterback, and renowned humanitarian Danny Wuerffel, whose life mission is to inspire greater service in the world. Wuerffel led the University of Florida to four SEC Championships and the Gators’ first National Football Championship as the team’s star quarterback. The 1996 Heisman Trophy winner set 17 NCAA and Florida records and won a myriad of other awards including the Maxwell Award, the Davey O’Brien Award, and The William V. Campbell Trophy, presented to the nation’s top scholar-athlete. As a nationally recognized humanitarian, Wuerffel inspires leaders to use their influence to make a positive impact.