NICEVILLE — Herschel Walker, still the hulking 6-foot-1, 225-pound picture of health even at the age of 58, walked off stage to a standing ovation at the Mattie Kelly Arts Center.

His speech at the 52nd Annual All Sports Association Awards show had hit on all marks — deep belly laughs, hoots and hollers, smiles plastered across the crowd of spectators.

As such, he couldn’t even make it back to his seat on stage without being beckoned back by emcee and former ASA president Bernard Johnson.

“We have another question,” said Johnson, who had followed Walker’s speech by asking the crowd for follow-up inquiries. 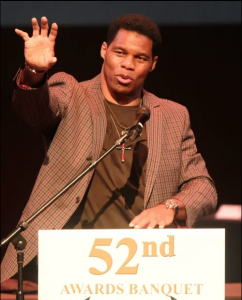 Walker had talked about growing up a chubby, bullied eighth-grader with a stutter — only to transform into valedictorian and a physical specimen built from 5,000 daily pushups and situps along with chin ups on a neighborhood tree limb.

Walker had touched on being a sixth-degree black belt and Olympian bobsledder.

Walker had talked about entering the University of Georgia with no knowledge of what the Heisman Trophy even was, only to feel slighted his freshman and sophomore years.

“George Rogers? Who is this guy?” Walker said of his third-place finish to Rogers in 1980.

“And Marcus Allen, this guy at USC? Walker said of his runner-up finish to Allen in 1981.

A year later he was consumed by humility when he finally broke through.

“The one year I don’t deserve to win it, I win,” he laughed.

He talked about being hazed at Georgia because he waited so long to sign his letter of intent, only to earn the respect of his fellow Dawgs by taking on every freshman task with aplomb.

He talked of contract negotiations, houses bought by Jerry Jones, the hideous color scheme of the Green Bay Packers, and how Philadelphia “even hated Santa Claus.”

He talked about family and acted out parts of Rocky V in a bizarre, hilarious analogy. And, of course, he mentioned his bromance with former president Donald Trump.

Yet, his brightest moment came last.

Asked who was faster between him, Bo Jackson and Deion Sanders — two former Keynote speakers for All Sports — Walker could only laugh at what he perceived to be a joke.

You see, back in 2017 at the Super Bowl in Houston, he was on Tiki Barber’s show with Bo and fielded the same question. By mere happenstance, who walks by? None other than Neon Deion.

So they raced, Walker said.

“I remember seeing Bo at the beginning, but he saw me at the end,” Walker laughed. “Bo can’t touch Heschel Walker.”

“I remember seeing Deion at the beginning too, but he saw me at then end.”

It was the perfect drop-the-mic moment for Walker, considered to be the greatest college football player of all time. And it was the perfect capper to the 52nd Annual Awards show, which again reinforced its commitment to the tight-knit Emerald Coast community.

Put simply, their impact is immeasurable.

Well, that is unless you’re the Boys & Girls Clubs of the Emerald Coast, the Okaloosa County chapter of Special Olympics, the Eleanor J. Johnson Youth Center and the Okaloosa/Walton County Fellowship of Christian Athletes – each of which received a $35,000 giant check.

When all’s said and done, over the last year the ASA has donated more than $150,000 to local schools, nonprofits and community efforts. And that mark is more than $1.3 over the last 10 years. Yet those monetary donations don’t define the ASA, which for five-plus decades has celebrated and honored youth athletics.