The Wuerffel Trophy, known as “College Football’s Premier Award for Community Service,” is presented to the FBS player who best combines exemplary community service with leadership achievement on and off the field. Named after 1996 Heisman Trophy-winning quarterback from the University of Florida, Danny Wuerffel, the Wuerffel Trophy exists to honor college football players who serve others, celebrate their positive impact on society, and inspire greater service in the world. More than 80 major universities nominate players for the award. 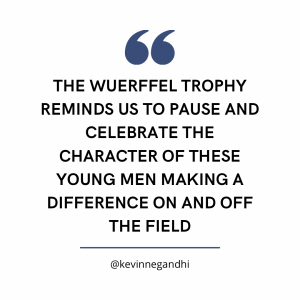 Said Negandhi, “In the game of football, so much attention is given to the big plays and the biggest names. The Wuerffel Trophy reminds us to pause and celebrate the character of these young men making a difference on and off the field.”

Danny Wuerffel, the award’s namesake added, “The National Selection Committee members help shine a spotlight on the incredible contributions these student-athletes make in their communities while playing football at the highest collegiate level. I am incredibly grateful for their participation and support, and we’re honored to have Kevin join this illustrious group.”

In 2017, Negandhi (@KevinNegandhi) joined the studio team for ESPN College Football on ABC. He currently serves as the SportsCenter 6:00 p.m. ET co-anchor and hosts the Top 10 Heisman Trophy Finalists show.

In addition to being a part of an Emmy-nominated SportsCenter, Negandhi has hosted NFL Live, Baseball Tonight, Outside the Lines, College Football Live, NBA Tonight, and the women’s NCAA basketball Final Four. Negandhi has also hosted the Special Olympics World Games since 2015. He has been a part of special projects that include co-hosting SportsCenter’s Veterans Day specials, and in 2015, he was awarded the Team ESPN Disney Volunteer Commentator of the Year. Negandhi joined ESPN in 2006.

Prior to ESPN, Negandhi worked as a sports director at WWSB-TV in Sarasota, FL. While working in Florida, he won three Associated Press awards — “Best Sportscast” in 2004 and 2005 and “Best Breaking Sports News” in 2005. Before that, he was a sports director for KTVO-TV in Kirksville, Mo. (1998-99). Negandhi began his career as a college sports stringer at USA Today in 1995.

A native of Phoenixville, Pa., he graduated from Temple University in 1997 with a bachelor’s degree in communications. He was inducted into Temple’s School of Media and Communications Hall of Fame. Negandhi is the first Indian-American to serve on a national sports network.

The 2022 Wuerffel Trophy Watch List will be released on July 28.