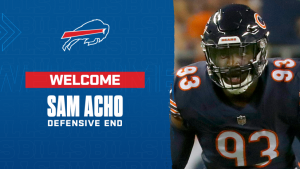 2010 Wuerffel Trophy recipient Sam Acho has a new home as it was announced he signed a free agent contract with the Buffalo Bills.

Acho played the last four seasons for the Chicago Bears appearing in 51 games with 25 starts. He is coming off a torn pectoral muscle injury suffered last October that landed him on injured reserve with the Bears as he missed the last 11 games of the season.

Originally a fourth-round pick of the Arizona Cardinals in 2011, Acho has recorded 17 sacks, 10 forced fumbles and three interceptions in his career.